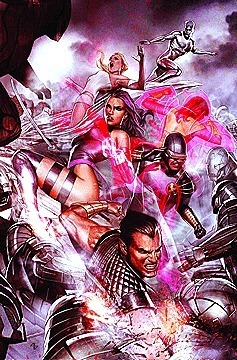 Issue: 525
(Marvel)
UNCANNY X-MEN #525
Written by MATT FRACTION Penciled by TERRY DODSON Cover by ADI GRANOV Variant by DAVID FINCH ’SECOND COMING’, CHAPTER TEN Things have never been worse for the X-Men. They’re stuck in an impregnable dome of Bastion’s creation. As if that’s not bad enough, inside this dome is a portal to the Days of Future Past timeline through which thousands of Nimrod Sentinels are pouring. Cyclops has sent Cable, Cypher and X-Force on a suicide mission into the future to destroy the portal, but do they stand a chance? 32 PGS./Rated T+ $2.99
PVP: 2.99 € 2.84 €
0.00 $
0.00 £